Gill welcomed special guests Reverend Kathy and Deacon Bob from Central Methodist’s Church to the April Meeting. U3A Todmorden is always pleased to have an opportunity to thank Central for letting us use their meeting rooms for U3A events and this afternoon we had special reason to thank them.

Gill thanked Treasurer Emily and Membership Secretary Brenda and their team of helpers who had worked hard to make it crystal clear what exactly needed to be done to renew membership this year; namely not only paying subs but also giving us your permission to hold safely and securely your details in accordance with recent legal changes. So, thank you to members for your understanding.

Gail gave her Groups Report and was delighted that there is the possibility of a new group starting. Those interested in forming a Dance group – not ball room dancing, but other than that the dances themselves would be decided by the evolving group. Let Gail know if you are interested. Also, please would Convenors contact John Boutell to let him know any News for including in the Websites News Desk.

Last year we celebrated our 10th Anniversary from 2008 to 2018 and Keith Coates and team presented us with the very impressive history of U3A Tod. Thursday was also part of the anniversary celebrations because it was agreed last year that during the 10th year that the Craft group would create a wall hanging, a tapestry to commemorate this milestone.

There wasn’t enough time to make something that could be presented at last year’s celebrations especially as discussions within the group made sure that maintaining the normal Craft group format in their Friday morning sessions was paramount. Gill had had no idea the lengths these wonderful people would go to, to make sure what they created would be of the highest possible standard. They knew, but she didn’t! 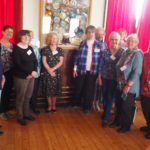 hours creating this commemorative masterpiece, including the core of 8 people who have overseen the project and made sure the textile would be ready on time. 12 members of the Craft group came to the presentation. Gill thanked Mary and the Craft group for the love and absolute dedication that had gone into their work. The Craft group have ticked as many boxes as possible to make sure this Tree of Knowledge is an absolute testament to U3A Todmorden’s work in Todmorden and The Upper Calder Valley.

On a final note the frame has been made from locally sourced recycled timber by the son in law of John McNair the instigator and driving force behind U3A Todmorden back in April 2008.

We were delighted that Rev Kathy and Deacon Bob could share the presentation with us, with Bob assisting Gill in the unveiling. Our special thanks go to them for allowing us to hang a non-religious artefact in their church hall a privilege which U3A Tod does not take lightly. 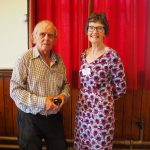 Gill introduced the main speaker of the afternoon Tony Waltham who gave us his slide show and talk of the geological formations of 7 of the volcanoes in Italy. I would defy anyone not to have been bowled over by his magnificent photos, his highly informative and charismatic style of presentation. I feel sure he will be invited back!

Peter Carrigan thanked Tony for his amazing talk which somehow did actually fit into the 60minute window he had requested.

Next month’s Members’ Meeting will take place on Thursday 16th May and the talk will be by Patrick Wildgust, entitled ‘ Shandy Hall and Laurence Sterne’. Members may like to read the following link in preparation for his talk. https://www.laurencesternetrust.org.uk/shandy-hall.php.

With Best wishes for a Happy Easter