On Thursday 16 January, there was a buzz of eager anticipation as enthusiastic U3A members filled Todmorden Central Methodist Hall. Sue Flood, internationally acclaimed award-winning wild life photographer and film maker was coming. Could our audience have imagined the extraordinary and enthralling journey they were about to embark upon with her?

Sue told how she grew up in small village in North Wales and took her first photo with her grandad’s camera. Her first two early inspirations were her father, Howard, who had travelled the world with the Merchant Navy and also David Attenborough, whose television programmes had already kindled her desire to explore wild places.

Sue’s accounts were peppered with humorous anecdotes, the first of which concerned her teachers’ response when she told them she’d like to work with David Attenborough. They suggested that she might like to study Domestic Science! Sue thought otherwise and went off to Durham University to study Zoology.

Acting on advice from someone at the BBC that she needed ‘something on her CV to make her stand out above other candidates’, Sue applied for Operation Raleigh in 1986 as a Queen’s volunteer with marine biologists. This provided her with ample opportunites for deep sea diving and underwater photography.

She was subsequently able to get a research job in the BBC’s prestigious Natural History Unit working on such global hits such as The Blue Planet and Planet Earth, with Sir David Attenborough. It was during this 11 year period that her first visit to the Poles happened; the beginning of her fascination for Arctic zones, exemplified by a plethora of photos and videos.

She recalled her trip from Moscow to Siberia, showing us a stunning photo of the Northern lights. She was en route to the Siberian arctic to visit the Nenets, guardians of a style of reindeer herding that is the last of its kind. This is one of the most challenging environments on earth where temperatures plummet to -50°C. Another photo showed Sue wearing a borrowed reindeer fur coat. She slept with the family in one large reindeer fur wigwam and for breakfast they ate chunks of reindeer meat washed down with vodka.

Sue’s adventures on more than 30 trips to the Arctic and Antarctic have taken her from camping at
-40°C, working on Russian icebreakers on trips to the North Pole and living with Inuit hunters on the floe edge, to diving with leopard seals in the Antarctic.

Whilst working on the ice sheets around Baffin Island in 2000, they awoke to find that the sea ice had broken up overnight, leaving them dangerously isolated for several hours on a now small ice floe. And only last year, she was stuck in the ice on a Russian Icebreaker for six days, ominously close to where Shackleton and the Endurance crew met their fate.

During these polar trips there were also some seriously dangerous personal moments like the time when a group of polar bears continued to wander towards their camp even after they’d shot several noise grenades. The bears were only only 30 feet away and you mustn’t let them know you’re scared; finally, the deterrent spray worked!

Sue’s entertaining photographic essay was rounded off in a final flourish of delightful descriptions and photos of Emperor penguins including that famous image of two parents with a chick on their feet.
After what can only be described as an unforgettable afternoon, the audience were briefly speechless when it came to the Q&A session at the end.

Some lucky members queued up for signed copies of her recent book ‘Emperor – The Perfect Penguin’, Foreword by Michael Palin

The speaker will be acclaimed author and presenter David Templeman, who will be talking about Mary, Queen of Scots, The Captive Queen in England, 1568-87. 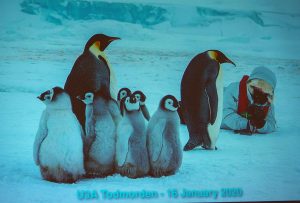