The penultimate trip of 2019 was to Thirsk and the award winning James Herriot museum. This “tardis” like surgery sits in the main street in Thirsk. Furnished appropriately for the period, the house has many rooms, including the parlour, where sit Tricki Woo and Mrs Pumphrey : don’t touch the dog it barks! The surgery area has many of James Herriot’s veterinary instruments on display. There is also a film room showing a short documentary, hosted by Christopher Timothy, describing the vet’s history and the TV and film series.

Known for his “All Creatures Great and Small” TV series, which followed the success of his books, Alf White – Herriot’s real name – did not start to write until his 50th birthday. Encouraged by his wife Joan, who had listened to his tales of daily happenings, Alf eventually bought a portable typewriter and in the evening would tap away. It took a long time before any publisher would take up his stories, and he dreaded the thump on the mat as another document was returned with a rejection letter.

Also in the house is a mock- up of a TV studio, some barns and a top floor devoted to children, who can learn that food does not just come from supermarkets, and can help deliver a calf.

The museum and the town of Thirsk are well worth a visit. The museum has a warm, friendly feel and the staff most helpful and proud of its history. 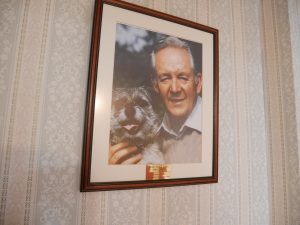