We had another well attended meeting this afternoon. There were about 130 present, including 4 visitors.

Our speaker was Gill Russell, who is the Chairman (the term they use rather than Chair) of the U3A North West Region Executive Committee. However, she wasn’t speaking to us about U3A, but about being “A Stranger in a Strange Land”, the strange land being Japan, where Gill and her family lived for 4 years and which she has recently revisited. It was a fascinating and informative talk which emphasised the juxtaposition of traditional culture and the ultra-modern in Japan with many illustrations.

The talk was very well received and clearly captured the imagination of many which was, perhaps, demonstrated by several members speaking to Gill afterwards about the best way to arrange visits to Japan. 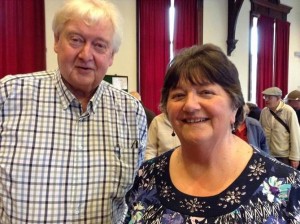 The World Affairs group are holding a special meeting on Wednesday June 8th at 2.00 pm  at Roomfield Baptist Church, Halifax Road, which is open to all members. There will be a charge of £1 to cover room hire.

The aim is  to inform and educate members about the EU and the UK in advance of the forthcoming referendum on UK membership of the EU. There will be no speeches for or against leaving and no vote.

There will be a series of short presentations by members of the World Affairs Group on a number of topics. The topics are still being developed and the provisional list below may change.

After each topic presentation there will be a short opportunity for questions, but not for speeches expressing opinions. The presenters do not guarantee to answer the questions, as they may not know the answers.

The next meeting on Thursday June 16th is the AGM. Notice of the AGM and Agenda are linked here . It will start at 2.00 pm and will be followed by the usual monthly meeting with a guest speaker who will be Dr. Frank Nicholson. He will be speaking about “Living in the Canadian Sub-Arctic”.

One of the items at the AGM will be election of Officers and Members of the Committee. This year there are three vacancies for : Chairman : Secretary : one Committee Member. If you are interested in any of these positions, or you wish to nominate another member, this Nomination Form has to be returned to the Secretary by June 2nd.