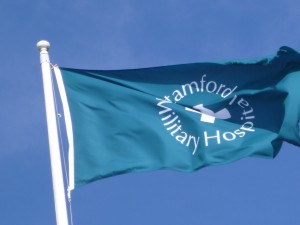 Dunham Massey, a National Trust property, was converted in 1917 as an auxiliary hospital and over 280 members of the armed forces received treatment there. 50 members of u3a Todmorden’s let’s go group visited the hall recently and were transported back to the days of ww1.

A re-creation of the hospital has been made from the archives. Rooms have been transformed into hospital wards and the stories of real people are revealed. Actors are around to add authenticity; some showing disturbing signs of shell shock , others the effects of amputation. The recorded voice of Lady Jane Grey describes her part in surgery on the brain of a wounded serviceman: she held a torch, while the surgeon worked.

By today’s standards, equipment and treatment was antiquated. However, the care of the nursing staff was apparent ; “eventually when they were clean and in bed, all they wanted was a cup of tea and a cigarette: they come in dead tired, the chief thing they need are bed and food.”

This proved to be an emotional day for all; medical notes and letters home were available to be read.