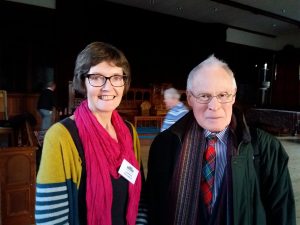 Before November 15th, few members of U3A Tod would have known that a teazle features in crests on the Clothworkers’ Building at Leeds University and in the decorations of Rochdale Town Hall’s council chamber.

And not many of us would have known what a teazle is.

By the end of Robert McMillan’s knowledgeable, detailed and entertaining talk we certainly did.

So, what’s a teazle? First, you must distinguish between the common teazle and the Fuller’s teazle. It’s the latter you need for raising the nap in clothmaking – it’s spikier and hardier.

The next thing is what is a fuller? He was the bloke who trampled newly woven cloth in stale urine to help clean, degrease and thicken the cloth.

After this trampling, the fuller raised the nap on the cloth by hand using teazles mounted on a handle. Then one or more shearmen trimmed the nap for a fine finish.

Later this ‘teasing’ process was mechanized. Specialist workers – ‘setters’ – mounted the teazles onto ‘rods’ that they inserted into a ‘gig’, a spinning drum across which the unteased cloth was passed.

Setters wore leather gloves to stop their hands being ripped to shreds. And indeed, spent teazles were used for the first passing of the cloth: fresh teazles are so sharp they rip new cloth.

By this time, the significance of the teazle to our local history was plain.  But it was also significant to Somerset’s history too. In Somerset, teazles were an 18th and 19th century commercial crop.

Planted by broadcasting, the teazles were harvested in the plant’s second year.

A maker-up then bunched the teazle stems in tens. The bunches were tied onto a stock to produce a ‘stave’. These staves were then transported to Yorkshire where sales were made, for example, in pub yards in Leeds.

Nowadays, teazles are still used in woollen cloth manufacture and are imported mostly from Navarre in Spain. They are available from Border Technologies in Cleckheaton.

Robert’s talk goes to show that even the most unexpected subject is interesting when presented with well-organised, knowledgeable enthusiasm. Local museums can expect a flurry of interest from U3A Tod members!

U3A Todmorden’s next members’ meeting will be on Thursday, December 20th, 2018 in the Central Methodist Church Hall in Todmorden at 1.45.

This is our Christmas meeting when we will enjoy Myrna Beet’s annual quiz and listen to Brass Band music provided by the Todmorden Community Brass Adult Learners’ Band.