Over the centuries, the life of Marie Stuart, Mary Queen of Scots, has been a source of inspiration to writers such as Madame de Lafayette, Friedrich von Schiller, Walter Scott, to musicians Donizetti and Schumann, and to countless film-makers.

On Thursday 20 February, David Templeman, a nationally known speaker and Elizabethan historian, recounted in exhaustive detail the circumstances of young Marie Stuart’s 19 years of captivity. His book ‘The Captive Queen’, the fruit of 12 years’ research based on primary sources, revealed previously unpublished details about the many different places in which Mary was incarcerated in England.

Mary, the only surviving legitimate child of King James V of Scotland, born in 1542, who became the rightful Queen of Scotland when she was only six days old, spent most of her childhood in France. In 1558 she married the future Francois II, and on his accession to the throne in 1559 she became queen consort of France.

Grief-stricken by François’ early death in 1560, Mary returned to Scotland, arriving in Leith on 19 August 1561 aged 18 years. She had lived in France from the age of five, spoke no English and had little direct experience of the dangerous and complex political situation in Scotland. As a devout Catholic, she was regarded with suspicion by many of her subjects, as well as by her cousin Elizabeth I, Queen of England.

In 1565 Mary married her English-born, half-cousin Darnley, gave birth to their son James in 1566 and, after a tumultuous period of plots and conspiracies, was abducted and imprisoned in Loch Leven Castle in 1567.

It was from this island castle that Mary escaped on 2 May 1568 to Workington Hall; little did she realise that this was her last night of freedom. On 18 May local officials took her into protective custody at Carlisle Castle. Within three or four months she was moved south to Bolton Castle in Wensleydale, away from the coast and the Scottish border for security.

Mary’s decision to flee to England from Scotland was seen as a threat by her cousin Queen Elizabeth who feared that Mary’s presence could become a Catholic rallying point for English revolts or invasions from Spain, France or Scotland. For this reason Mary was held in secure and well-defended places.

Thus, Mary was moved further south, and further from the sea, to secure places in the Sheffield area. The main locations used to hold Mary over the next 19 years were Tutbury Castle, Wingeld Manor, Worksop Manor, Chatsworth, Shefeld Castle, and Shefeld Manor. For all of these places, the political set up, the people involved and the conditions endured by Mary were described with details based on meticulous research.

Neither did David Templeman spare us the details of how Mary’s health seriously suffered as a result of the insalubrious conditions endured in some of the places where she was held captive. The young Marie Stuart who’d been described as vivacious, beautiful and clever, became a ghost of her former self.

Especially tall, she attained an adult height of 5 ft 11 inches. A sportswoman, she rode, hunted and hawked dressed in men’s garb and also enjoyed golf, tennis and archery. One can only feel profoundly dismayed by the effect prolonged incarceration had on her physical and moral well-being. For the most part, during these long years, Mary had to content herself with embroidery.

David Templeman’s fascinating and thoroughly researched account was applauded with much enthusiasm and members eagerly queued up to buy signed copies of his book ’Mary Queen of Scots the Captive Queen of England’.

Coronavirus: please do not attend our next U3A meeting on Thursday 19 March if you have any symptoms of a cold or cough.

Our speaker will be  Dr. Georgina Ferry  with a talk entitled “From Diamonds to DNA – Women in Science” 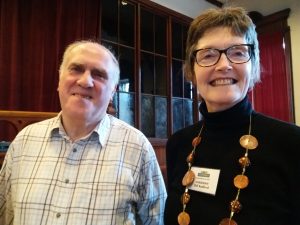